This report discusses observations made in the course of usability testing of the KUA Technical Support site. (http://kuatech.kua.press.kua.org) Recommendations to improve the usability and navigability of the site are enumerated. The report shows the home page of the site as it appeared during testing and after the recommended changes have been made. 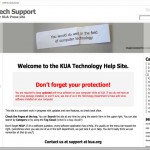 The KUA Tech Support blog was designed to be easy to search. The conventional wisdom of a few years ago, when I had last studied site layout, was that most people looked to the left side for navigation and so I used the left sidebar for a text widget titled Very Important Posts, this contained links to posts titled iPrism, Finding Your Network drive –PC, Finding your network drive-Mac and Printing on both sides. I placed the two posts on finding network drives in this text widget at the outset. The department has struggled for years to make students aware that they have network storage, and these two posts are indeed very important to students.

The other two posts in this widget: Printing on Both Sides and iPrism are arbitrary and subject to change. Below the text widget in the left sidebar I had Recent Posts, designed to show 15 posts. Recently I added a link back to KUAPress at the top in order to promote the platform as a whole. I incorporated a site search bar, Categories and a tag cloud on the right sidebar. I had used tags extensively on the site.

I tested for number of clicks and time spent in completing two tasks: finding information on changing the network password and discovering how to map a network drive. This gave me solid quantitative data. I also took notes on general observations as the testers navigated the site while completing the tasks.

None of the testers read any of the introductions on the home page that I observed but of course they were intent on completing the task so perhaps this was not really a valid observation.

Contrary to what I believe to be the conventional wisdom, all testers read the right sidebar first. Several never seemed to even glance at the left side where under Very Important Posts were two posts titled as the answer to Task 2, only one clicked the appropriate link in the text widget (after searching) when given Task 2.

Four of my student testers used the Search bar rather than clicking links to begin finding the answer to the task given. I don’t know why this surprised me, but it did. When I put the site together, I assumed that most would use the Categories or the Tag Cloud to find answers.

Five testers, when looking for the answer to Task 1: finding out how to change their KUA network/email password landed on a very long post on using Outlook Web Access. This was logical as it’s in the email category, has an email tag. However testers wasted a lot of time scrolling all the way to the bottom of this long post before they realized it did not have an answer to how to change the password.

The archive pages seemed to confuse the testers. These search results, whether the testers use the Search bar or got results through clicking on a Category link or tag, appear as excerpts, you have to click the headline to have the whole post appear. One student, asked to comment, suggested making these headlines underlined.

Although the sample was quite small I did get some interesting results and some very concrete suggestions on how to make the KUA Technical Support site more useful.

First, the Very Important Posts text widget should be on the right side. This is where every student’s eyes landed first. The Frequently Asked Questions page, a vestige of the sites first iteration at WordPress.com, should be reworked and expanded.

The theme should be modified to show an underline for post headline links in archive and search results.

The home page should have less on it. The students didn’t look at it, even if it was the first time on the site as it was for two of my site testers. It should have very little wording but include important information, such as where to find the members of the department.

I then made the recommended changes. 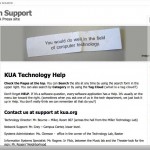 I plan a second round of testing to see if the changes made in the site improve time and number of clicks when completing the same tasks.